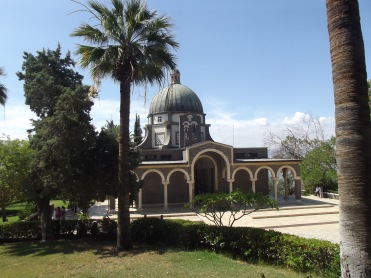 We begin our day at the Mount of Beatitudes which is the traditional location for the Sermon on the Mount. The church built here was designed by Antonio Barluzzi, the Franciscan monk/architect who built a number of structures around the country. He used 8 columns on the inside, one for each Beatitude.

Next to Capernaum, the home base for the Ministry of Christ.

This is a great site to explore as it has been long excavated by Franciscans under the Israeli Archaeology Association supervision.  Nearby the synagogue is a building which was venerated as early as the mid 1st century! A concentric church was built around it in the 5th century as it was believed to have been the House of St. Peter where Jesus lived!

Next up is the hometown of Mary Magdalene called Magdala. The location was being prepared for a Guest House when ruins were uncovered including this 1st century synagogue. Later digging uncovered a stone table with a Menorah on it suggesting it was used to study Scrolls of the Old Testament. This is the only known 1st century synagogue around the Sea of Galilee. Some of the painted plaster on the walls can also be seen.

There are other places we can visit around the Lake such as Tabgha where the miracle of the fishes and loaves took place, Kibbutz Ginnosar which has the remains of a fishing vessel from the 1st century (nicknamed the Jesus Boat) or St. Peter’s Primacy (cover photo), a popular site for people who want to touch the water. Additionally, there are other historic sites we can visit depending on the itinerary of the day.

If a group is interested in having a Baptizing ceremony in the Jordan River there is a place called Yardenit which has been set up for that just south of the Lake.